When can I pierce my baby's ears?


I was asked this question today by a parent of a 6 month old, and I was stumped. The common question that usually gets asked is whether to get the ear pierced by a doctor or a jeweler (a common practice in India), and this was a new one for me. Here is what I found online....

Although some parents like to get their baby's ears pierced as early as possible, the American Academy of Pediatrics does recommend that you "postpone the piercing until your child is mature enough to take care of the pierced site herself."
This can help avoid some of the risks of baby ear piercing, including:
How big are the risks? They are likely fairly small, but since baby ear piercing is usually just a cosmetic procedure that can be put off to a safer time, there is little reason to take that even small risk.
Source
My view: I would agree whole-heartedly that waiting till the child is at least 5-6 years old makes sense.
Posted by Dr. Gaurav Gupta M.D. at 6:41 PM No comments:

Ghana today made history as the first African country to simultaneously introduce pneumococcal and rotavirus vaccines in its national immunization programme in a bid to fight pneumonia and diarrheoal diseases, each of which accounts for approximately 10 per cent of under-five deaths in the country.
Ghanaian First Lady, H. E. Dr Ernestina Naadu Mills, said at a ceremony in Accra marking the introduction of the two life-saving vaccines:

"I am happy to announce that vaccines against pneumonia will from today be available at all health centres and hospitals. Children will be given three doses of the vaccine at 6, 10 and 14 weeks of age.
Also, rotavirus vaccines will be administered to children aged 6 and 10 weeks."
In his remarks, WHO Deputy Director-General, Dr Asamoah-Baah, praised Ghana's "bold" decision to introduce the two vaccines at the same time and spoke of the phenomenal progress Ghana had made over the years in immunization coverage from a national coverage of 4% with just one antigen in 1985 to a national coverage of 90% with nine antigens in 2012.
Source: Ghana introduces 2 new vaccines

My view: I take a lot of lectures for Pediatricians across India. Given that new vaccines are one of my areas of special interest, I enjoy teaching about controversies & questions related to these in various fora. However, I always like to say that if we could get Rotavirus & Pneumococcal vaccines in our National Schedule, we could reduce the mortality rates tremendously in India. Now that Ghana has shown the way, we too should take support from GAVI and do this good deed. Our next generation will surely thank the politicians who take this initiative, and we will end up saving hundreds of thousands of lives.
Posted by Dr. Gaurav Gupta M.D. at 7:38 PM No comments:


By David Beasley
ATLANTA | Fri Apr 20, 2012 10:14am EDT
(Reuters) - Measles cases in the United States hit a 15-year high in 2011, with 90 percent of the cases traced to other countries with lower immunization rates, the Centers for Disease Control and Prevention reported.
There were 222 cases of measles in the United States last year, more than triple the usual number, the CDC said. There had been only about 60 cases per year between 2001 and 2010.
No one has died of the disease in the United States since 2008. But approximately 20 million people contract the measles virus each year worldwide, and about 164,000 die from it, said Dr. Anne Schuchat, director of the health agency's National Center for Immunization and Respiratory Diseases.
The agency said in 2000 that home-grown measles had been eliminated, but cases continued to arrive in the United States from abroad.
There have been more than 25 measles cases reported so far in 2012, most of them imported, the CDC said. The virus can easily enter the country through foreign visitors or Americans traveling abroad who bring the disease back with them.
Measles is highly contagious and is transmitted when an infected person breaths, coughs or sneezes, Schuchat said. The disease can be spread even before an infected person has developed the rash from the virus.
"You can catch measles just by being in a room where a person with measles has been even after that person has left the room," Schuchat said on Thursday.
Measles cases were found in 31 states in 2011. Last year's count marked the highest number of cases since 1996, when there were 508 cases in the United States.
All but 22 of the 222 cases last year involved patients who had been infected overseas or caught the virus from someone who had been abroad, the CDC said. The source of the other 22 cases could not be determined.
Many of the cases were traced to Europe, where in some countries immunization rates are lower than in the United States. Europe suffered an outbreak of the disease in 2011, reporting more than 37,000 measles cases.
France, Italy and Spain, popular destinations for U.S. tourists, were among the hardest hit, said Schuchat.
"It's very important for travelers heading off to Europe to make sure they are up to date on their immunizations and that their children are too," she said.
Those who have already had measles or have been inoculated are not considered at risk of contracting the virus, the CDC said. The CDC recommends children receive two doses of measles, mumps and rubella vaccine starting at 12-15 months of age.
More than 90 percent of U.S. children have been vaccinated against measles, the CDC said.
"We don't have to have this much measles," Schuchat said. "Measles is preventable. Unvaccinated people put themselves and other people at risk for measles and its complications."
Source
My view: Given the low incidence of measles vaccination in our country, it is no wonder that we have large scale epidemics and deaths in India. However, a small minority of our parents are not reading about the so called 'ill-effects' of vaccines on the net, and thus questioning the need for vaccination. It is imperative that we pediatricians remain aware of the risk of not vaccinating any child against these common, life threatening yet easily preventable illnesses. This is not only in the interest of the child, but the society at large too.
Posted by Dr. Gaurav Gupta M.D. at 10:05 AM No comments:

Stuttering is a very common cause of excessive anxiety in parents, here is a typical case ...
Question: I have a two year old who has just started to stutter suddenly, will this go away?  Also he gets quite anxious and starts clenching when he tries to say certain words? Is this normal? Is there anything we can do at home that can help?
Answer: I can understand your anxiety, so let me try to assist in the best possible way ....
While stuttering is quite common and approximately 1 in 20 children will stutter in their preschool years, there are marked individual differences. Stuttering may begin gradually or suddenly. Children may stutter mildly or severely and they may be upset by it or completely unconcerned. Stuttering usually fluctuates, sometimes disappearing for days and then reappearing. It often increases when the children are excited or tired. Although it is true that many children who stutter do grow out of it without treatment, it is not possible to predict with any accuracy which children will and how long it will take. We also still don't know what exactly causes stuttering but as a parent, you can be reassured that it is not caused by a traumatic event, nervousness, low intelligence, bad parenting, or imitation. The best course of action is to contact a Speech Language Therapist who specializes in the treatment of stuttering and make an appointment for an assessment.http://www.stuttering.co.nz/Default.aspx?id=14Coming to your specific case,Since there is some amount of anxiety - clenching associated with the stuttering, it is not just a normal dysfluency, and qualifies as a stutter. This, along with your concern, merits a visit to the speech therapist for evaluation and treatment.Here are a few things that you can do at home,Try to model slow and relaxed speech when talking with your child, and encourage other family members to do the same. Don't speak so slowly that it sounds abnormal, but keep it unhurried, with many pauses. Slow and relaxed speech can be the most effective when combined with some time each day for the child to have one parent's undivided attention. A few minutes can be set aside at a regular time when you are doing nothing else but listening to your child talk about whatever is on his mind. When your child talks to you or asks you a question, try to pause a second or so before you answer. This will help make talking to your child less hurried, more relaxed. ry not to be upset or annoyed when stuttering increases. Your child is doing his best as he copes with learning many new skills all at the same time. Your patient, accepting attitude will help him immensely. Do remember, Effortless repetitions or prolongations of sounds are the healthiest form of stuttering. Anything that helps your child stutter like this instead of stuttering tensely or avoiding words is helping. Finally, If your child is frustrated or upset at times when his stuttering is worse, reassure him. Some children respond well to hearing, "I know it's hard to talk at times...but lots of people get stuck on words...it's okay." Other children are most reassured by a touch or a hug when they seem frustrated.http://www.stutteringhelp.org/Default.aspx?tabid=6With these home tips, you are ready to ask your pediatrician for an appointment with a speech therapist for further evaluation and more tips to be able to deal with this :)Don't worry, this too shall pass, and for most preschoolers, it goes of pretty soon, with or without any intervention,Finally,http://www.stutteringhelp.org/is a great web resource to help you in your quest to understand more about this disease, use it !
Posted by Dr. Gaurav Gupta M.D. at 6:31 PM No comments:

Pediasure versus Ensure - what's the difference ?

A fellow pediatrician complained about the Medical Representative of Pediasure/ Ensure asking him actively to stop prescribing Ensure for kids. However they were apparently unable to provide evidence to back their claims. So, I did a little bit if digging up to see if there was any significant difference between the two. This is what I found.
Pediasure is recommended for kids between 2-12 years, while Ensure is for adults. The good news is that substituting one for another is not likely to cause any serious problems for most normal kids / adults, as per my net based research.
Here are the main differences: 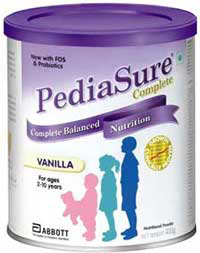 Ensure has:
7 g of fat
1 g saturated fat
190 mg sodium (big jump!!!)
390 mg potassium
22 g sugar
9 g protein
Source: http://www.ratshackforum.com/forum/viewtopic.php?f=38&t=9333
This suggests that Pediasure has more fats including saturated fats (possibly omega 3 etc. for brain growth), and lower protein & sugar content.
On the other hand, the high sodium in Ensure would be a negative for renal/ cardiac patients too.
Overall though, given the relatively small difference in the various ingredients, it is likely that for most individuals you can probably use either one, especially in regard to picky eaters who may like the taste of a particular brand.
Source:
http://www.justmommies.com/forums/f113-ftt-and-weight-gain-issues/1233340-pediasure-vs-ensure-other.html
http://forum.baby-gaga.com/about1754910.html

For someone wanting to do more research the following links give detailed information
http://nutritiondata.self.com/facts/baby-foods/466/2
http://nutritiondata.self.com/facts/dairy-and-egg-products/7708/2
I would like to reiterate that this is my personal opinion based solely on Internet search. I would encourage you to discuss your nutritional questions with your pediatrician or a nutritionist, especially if there is some special concerns.
Posted by Dr. Gaurav Gupta M.D. at 12:53 PM No comments:

The Internet Parent (TIP) - Common questions in Childcare and Parenting by Dr Gaurav Gupta is licensed under a Creative Commons Attribution-NoDerivs 3.0 Unported License.